After the Reindeer I kept driving south next stop Finland!!! On the way it started to rain, the first time in 2 weeks. I pushed on until it became a torrential downpour!!! I pulled over to gas up and eat some food at a little restaurant. Turns out that the waitress was originally from Russia so we had a lot to talk about.
Some of the things I saw
Elk 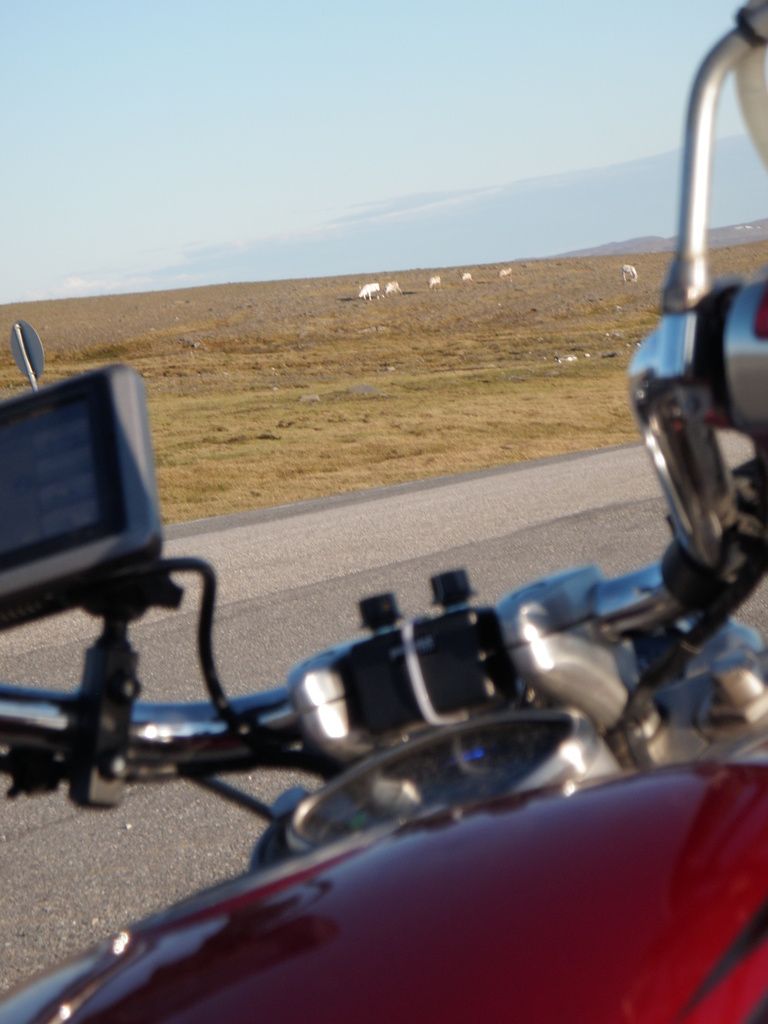 I eventually headed down the road in a slight rain. The speed limit in Finland was rather high 120kmh. I was going down a little 2 lane road and saw the rest area off to the left of the road. Then I saw a van coming the other direction turn on his blinkers to turn right into the rest area….. The next thing I know a car pulls out of the rest area right in front of me!!!! She hadn’t seen me and still didn’t see me. I couldn’t get into the other lane because the van saw what was about to happen and froze. There was no shoulder to the road and then about a 4 foot deep ditch!!! I got over towards the ditch as far as I could go while trying to stop! The lady still hasn’t seen me and now my front tire is even with her rear tire and she is trying to get over more to give the van more room!!! I had no choice I moved over a bit more. The rest is a blur! The rear tire started to slide around and down into the ditch and I was getting sideways! I remember looking into her passenger window when she finally noticed me. Somehow I ended up back on the road with both tires still on the ground! I have no idea how I didn’t wreck she pulled over and was crying and apologized… I was in a state of shock looked at her and just said “no harm keep going Ohhh wait let me go first then keep going!”
I drove on the rest of the day uneventfully and made it to a nice campground!
The next day was the Fourth of July. The day was full of welllll driving!!! I drove most of the day and found a campground near the border with Russia.

I set up my tent next to this older couple with a beautiful restored 66 Volvo. I showered and when I came back to my tent this 80 year old man was waiting for me. He says “I looked at your plate and wanted to say Happy Fourth of July! Its been a while since we’ve seen a Jayhawker around here.” I looked at him funnily and said Jay Hawker huh you must of spent some time in the Mid West. He chuckled and said “ya you could say that I was born and raised there!” We got to talking more and come to find out he played Softball with my Grandfather back in the 50’s after the War!

Its nights like this that make a whole trip. It was just the icing on the cake to spend the Fourth of July on a beach in Finland talking to another Kansan comparing stories from my child hood!
The next day I got up and got through the border and to St. Petersburg where I stopped at the local biker club. The previous year I helped a guy out who was broke down on the road. He belonged to the club and asked me to stop by. I had no time then but this time I was in. Oh man all the members showed up and each had a baseball bat attached to the bike or a 12 inch knife on their hip!!!! I didn’t take any pictures due to the fact I was scared shitless most of the time. Everyone ended up to be cool and I enjoyed it but was glad to get a hotel and get out of there!
The drive back to Moscow was dull.
That was my trip. Sorry the ending is a bit dull but I had spent to much time enjoying the rest of the trip and had to get to getting to be back to work! So the last about 5 days were mostly just riding. I took a bunch of videos I hope to go through this winter when I have more time I will let you guys know when I get something put together.