We landed in Bishkek, Kyrgyzstan in the evening. After haggling for a taxi we arrived at our hotel.

Then went out for some food at a local joint. Since it was March, 8, Womans Day. Everything was rather busy but we were able to find a nice place.

So the next morning we went out exploring in the snow!

We walked around Bishkek Exploring the sites and trying to stay warm! We found their main square. 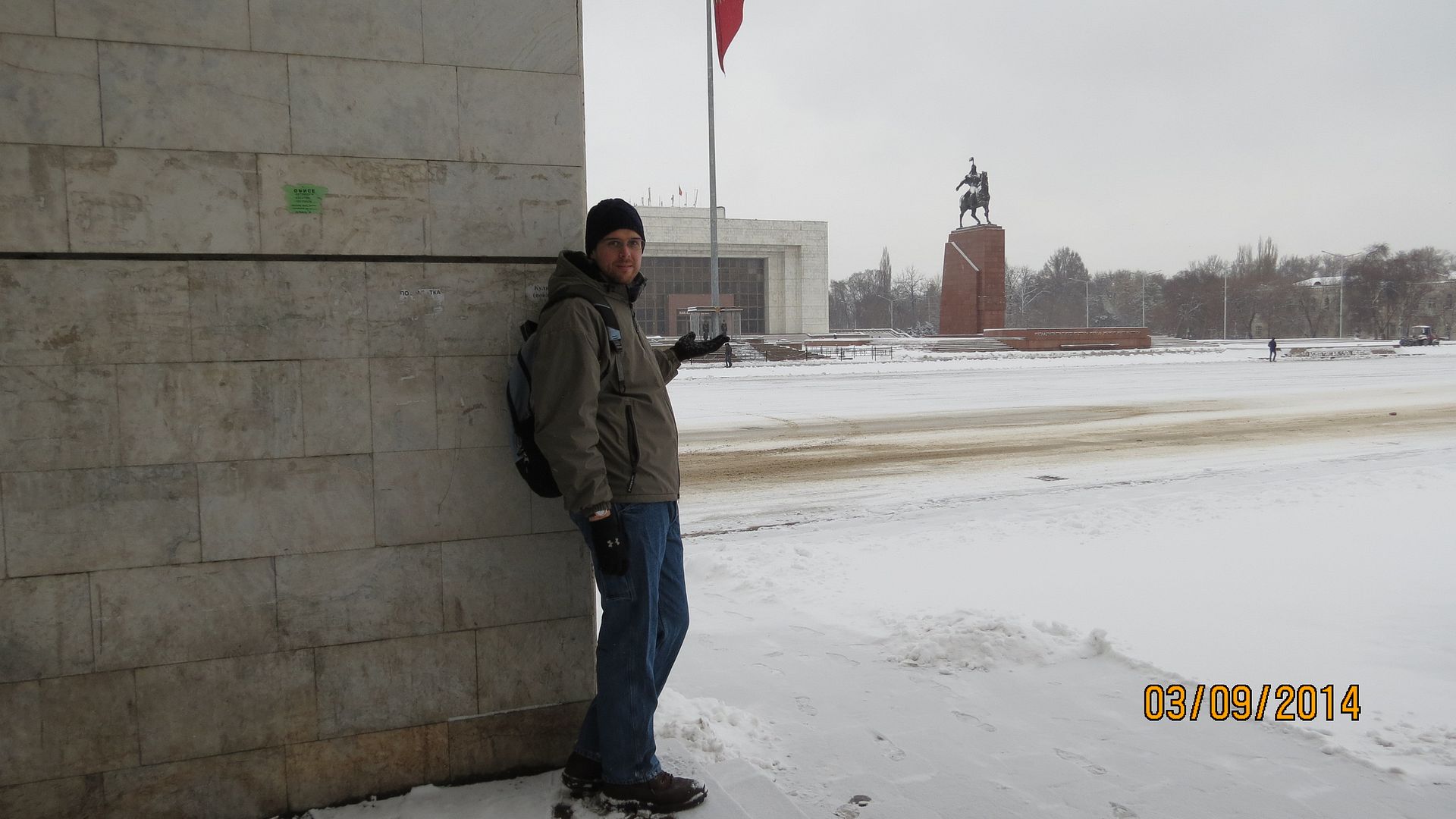 As the snow continues we took comfort in knowing that the tractors being used to clear the street would be warm. Neither of us had ever seen such a thing before. Who would think putting a blanket on your tractor would be useful.

After walking around for a few hours we stopped in a little restaurant. It was owned by a nice Chinese family who gave us huge portions of amazingly tasty food!

The next day it was time to go snowboarding! Okcana had dont some research and found a place not to far from Bishkek we could go. The trick was going to be getting there. After asking around we were told our best option would be to take a taxi to the edge of town. There would would be dropped off at a little farmers market. We should then ask around for a ride to the mountain. To get back we should just ask people at the mountain for a ride back to Bishkek. So that was the plan.

We got to the farmers market. Asked around and someone said they would give us a ride to the mountain. When we got in his car, yes car, we could tell his normal passengers were sheep, as the car reeked of of them. It was an uneventful ride though and we arrived. We paid the $15.00 for rent of a snowboard and access to the mountain for Okcana and off she went.

I sat down at their cafe at the bottom and read a book and just enjoyed the scenery.

Once she was satisfied with her snowboarding we decided it was time to get back to Bishkek. We asked around for a ride but nobody would help us out. So we started walking the 4km back to the main highway. About halfway to the main highway a car stopped and offered us a ride. It was an older gentleman and his son. They were doctors just out for a ski.

As we were heading the 20km back to Bishkek we saw a group of people on the side of the road with horses. We stopped to see what was going on. They were playing Ulak Tartysh a traditional game in these parts. Its basically polo but for a ball they kill a sheep and cut off its extremities and then sew the holes shut. The idea is to pick up the “ball” and run with your horse to the other end of the field and deposit it in the goal to score a point.

We watched the game from afar for a while before loading up in the car and moving on. As we drove the father asked us if we had went to the outdoor museum. We hadnt as it was a traditional Kyrg village just outside of Bishkek and we didnt have a means of transport to get there. So he decided to make a detour to show us the museum.

This was our guide at the museum.

The museum was pretty cool. They had some traditional yurts there along with some other things like a swing and also a stove from long long ago

From there we went back into Bishkek and our saviors with a car took us to a traditional Kyrg restaurant! We ate and ate and ate then I asked please let me pay for the food, as they had refused any money for gas for giving us a ride. They adamantly stated NO you are our guests you will pay for nothing. I pleaded to let me pay at least for something. After being assured that it was not going to happen I gave in and humbly thanked them for their hospitality.

We went back tot he hotel and slept like babies. In the morning we headed to the airport for our flight back to Moscow. We went to check in and there was some sort of issue.  I am not sure why but they refused to print me a boarding pass. Instead they hand wrote a boarding pass and gave to me. After argueing with them saying this was not acceptable I just took the pass and tried to go through customs. As soon as I gave him me boarding pass. He looked at me like I was stupid and sent me back. After 30 minutes of back and fourth I was allowed to pass and to board the plane

I will always remember my handwritten plane ticket in Kyrgyzstan and the flight back to Moscow on a fully loaded plane that reeked of sheep.