The next day my goal was Kursk with a quick stop at Prokhovorka, where the bulk of the Battle of Kursk happened.
As I was heading out of Belgorod going north about 6 miles of Russian soldiers in troop transport past me headed south, toward Ukraine…… keep an eye on the news here in the near future.
This was at the turn of towards Prokhovorka

Finally arrived at a field full of tanks.

This is Prokhovorka where some of the largest tank battles in history took place during Operation Citadel. It is still debated but somewhere close to 300 tanks fielded by the Germans and close to 800 by the Soviet Union.
The tanks above are located in a field were much of the fighting took place. There is also this bell tower

It started raining while I was here but it was still quiet impressive. All these tanks and artillery everywhere lined up. I wish they could have had some German tanks standing opposite this but it was only Soviet that I saw.
The fighting must have been horrendous! Here is a quote from a German guy about his experience there “In front of me appeared fifteen, then twenty, then thirty, then forty tanks. Finally there were too many of them to count. The T-34s were rolling toward us at speed, and carrying mounted infantry.”I guess it was to the point that tanks and half tracks were ramming each other the combat was so close.
Then I went into the town to go to the museum for the battle.
In front of the museum they have this statue of Soviet tanks driving over and crushing some German tanks.

It was really interesting in front of the museum they had stuff that farmers had dug up and brought in and dumped off. This was just laying around in their front yard. 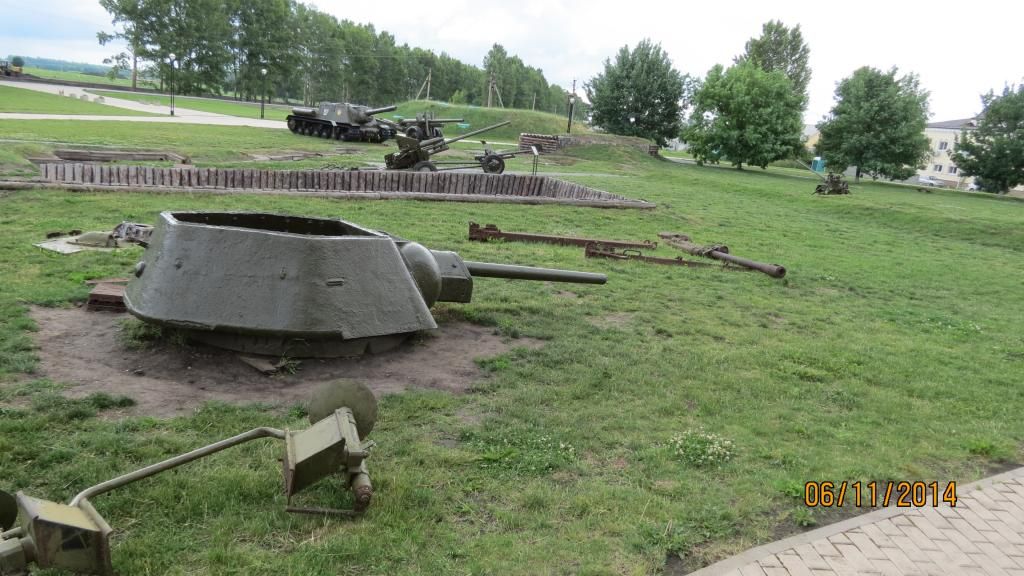 Then I went into the Museum. It is a very good museum with almost everything in Russian and English, which seems rare around Russia.
Another M72

They had a exhibit for the nurses and doctors of the war. They said for every Soldier they brought back wounded or killed in battle if the nurses brought his weapon with him they would get a medal after so many weapons recovered. I dont know of you can zoom in on this enough to read it.

After the museum I started heading north again towards Kursk. I ran into another museum on the side of the road. The museum wasnt open but they had a small outdoor display including this airplane

I had intended to stay the night in Kursk but first I wanted to check out Victory Park.
They had this huge triumph arc there that was pretty cool

Zhukov on the other side of the Arc

After driving through the town I decided I didnt want to stay there. It was kind of run down and dirty nothing special that I saw. So I decided to head down the road towards Voronezh.
I stopped at this German Cemetery near Kursk. it has 24,000 buried at the moment and will have about 40,000 when finished.

After that I stopped at a cafe and got some food. The ladies there were nice and pointed me towards some small rivers down a road saying I should be able to find a nice place to camp there.
I headed down the road but couldnt figure out how to get to the river, I could see it on my gps but no way to get to it. Finally I decided to turn down this little 2 track trail going down the side of a farmer field. about half way there I saw the farmer….. I thought I was going to be in trouble! Farmers dont like people driving on their field access roads in Kansas. I asked him if I could put my tent up somewhere. He was so great told me to go back to the next drive way turn down it and the drive leads through his yard to the river!!!!
This is where I ended up after about 3 miles of driving through fields

Then a bunch of baby geese strolled by

I was happy but there was no where to set my tent up that wasnt plastered with Goose krap……… So I headed a mile back and there was a small bunch of trees and I camped there.

The farmer stopped by later and we talked for a while about farming and how he came to be where he was. It was a great day I was tired and slept like a baby. woke up the next day and drove out through the farmer and his herd of cattle he had grazing on the path I was leaving on.
Continue: Voronezh and Hungarian Cemetery