In the winter of 2011 I was in Moscow with a craving for 2 wheels. I thought to buy a bike in Kiev but it was dreadfully expensive. I did a little research and stumbled across a company called Flex International . I contacted them and we came to an agreement. They would pick my bike up in Kansas put it on a truck and take it to Florida where it would be put on a roll on roll off boat to Bremerhaven, Germany.

All of this would cost me $1,100 and would take approximately 2 months. So it was decided I bought a one way ticket to Bremerhaven.

I flew into Hamburg and hopped on a train to Bremerhaven. Where my bike was waiting for me. I went to the office of the shipping company and was met by a nice friendly group of people. They took me around town to get all the documents I needed to get the bike out of customs.

We went back to the shipping doc and my bike was rolled around to the front. I hooked the battery up and it cranked right up first try!

I started back towards Moscow! First through Germany and into Poland.

Through some forests in Poland on some nice slow twisty roads

Stumbled upon an old tractor in the country side

Then I made it into Latvia where I had a problem. I was going through the town of Daugvapils, Latvia when it happened. I was coming up on a busy intersection and watching the other cars and didn’t notice the tram track protruding form the ground a good 4 inches. I hit it the front wheel was ripped out of my hands and and I flew over the handlebars. I landed on my shoulder and immediately got up. I tried to pick the bike up but realized I couldn’t. There was a huge pain in my shoulder. Finally a taxi driver came and helped me pick the bike up and get out of the intersection. He left me and I rested. I didn’t want to go to a doctor in Latvia because I knew I wouldn’t be allowed to drive.

I made the decision I would try to drive the last 300km to the border and get int Russia and then decide from there. I got on the bike and had to use my other left hand to pick up my right arm and set it on the handlebar. I took off and it actually felt good. With my hand on the handlebars my shoulder was lined up and the pain gone, until I hit a pot hole when it came flooding back.

Of course it started raining then my GPS took me down a bumpy dirt road. It was terrible with every bump a horrendous pain shot through my arm and shoulder.

Then I finally made it to the border!

After spending what seemed like ages at the border I was finally cleared to enter Russia! 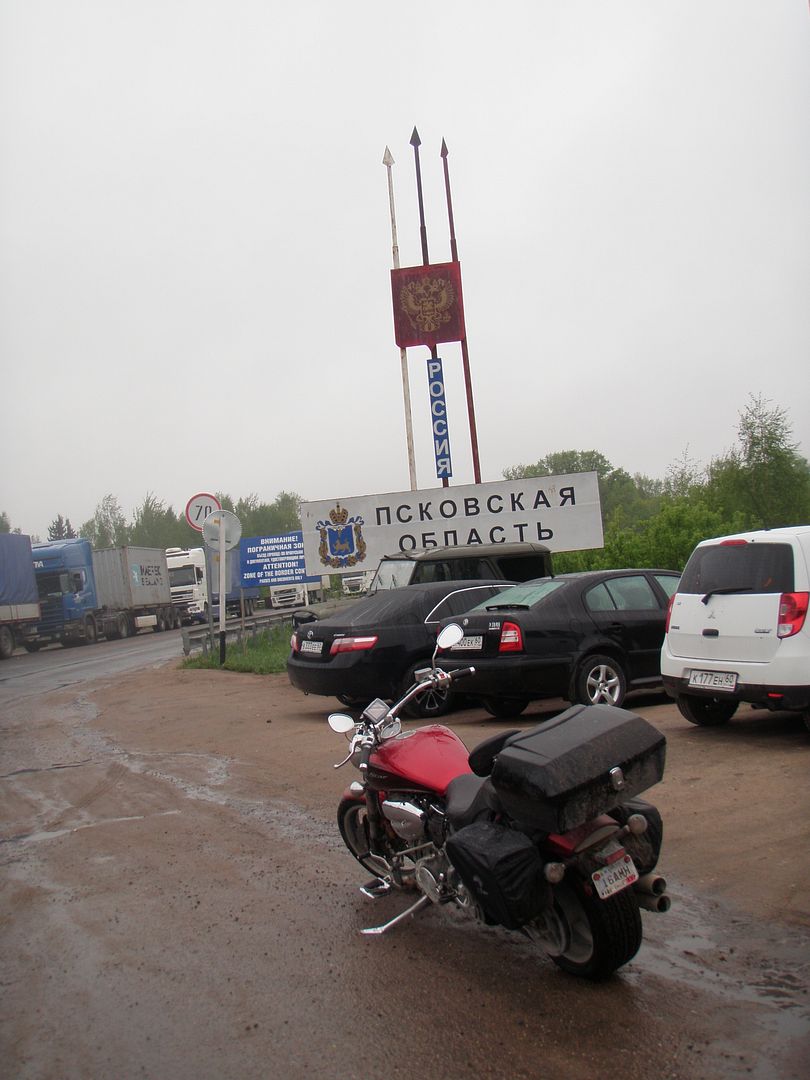 I took off down the road and got gas at the first place I could. I decided just to keep pushing and try to make it to Moscow. As the sun was behind the clouds and it was raining it was a bit cold. As I drove I would get cold and shiver and that would cause more pain to shoot down my arm. Finally it was decided I just couldnt make it. I pulled over and called Okcana. She made some phone calls and said that tomorrow her and 2 of her friends would come and pick me up and drive the bike back!

I found a roadside hotel and got a room. It was hard to get undressed but I managed. Then I more or less passed out. I woke the next day and Okcana and her friends were there!